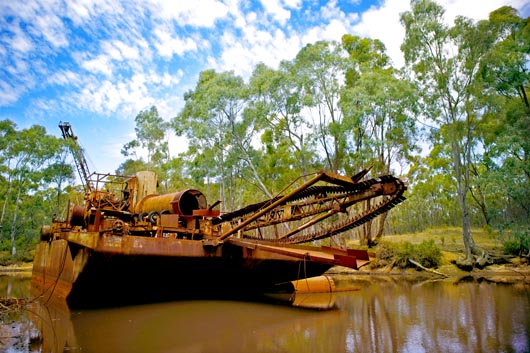 Located at Porcupine Flat which was once a flourishing area of the Maldon goldfields, many of the town's notables spent much of their riches 'backing the winner' on a hot, dry afternoon. The track and oval are now used for Campdrafts and the local annual show.

The dredge and dragline represent that phase of gold mining in Maldon when technology enabled relatively large scale reworking of earlier deposits which had first been worked by thousands of individual prospectors in the rush of the 1850s.

Mr George Heywood commenced working the site at Porcupine Flat in 1958 where he developed the dredge operation on Porcupine Creek. He purchased the dredge sometime after 1958, and it may not have been fully operational until after 1973. Operations ceased in 1984, after moderate success. This dredge is a smaller reconstruction of the one that operated in the Jim Crowe Creek south of Newstead, from 1948 to 1954.

The dredge originally worked to the north of it's current site, the existing dam being constructed when the Porcupine Flat Gold Treatment Works were constructed over the original workings. The dragline standing on the bank of the dam was brought from the Yallourn Coal Mine to assist in creating the initial dam and the ongoing operation. It proved to be of little value and was abandoned in it's present position early in the operation.