At the top of the climb you will find ample space to park with tables and chairs available to picnic. The 360 degree view from the ground is impressive but the view from the tower is panoramic and stunning.

The top level of the tower is now used for fire spotting, but the lower levels are open to the public. From these levels, neighboring peaks are visible, including Mt Alexander near Harcourt, Mt Korong near Wedderburn, Mt Franklin near Daylesford, Mt Beckwith near Clunes, Pyramid Hill, Mt Buninyong south of Ballarat and Mt Macedon. To the west in the middle distance, Cairn Curran Reservoir can be seen, a major irrigation and water storage facility on the Loddon River – used in less dry times for fishing, boating and water skiing. Beyond that can be seen the white mounds of spoil from deep lead mines that worked deposits of alluvial gold in buried riverbeds. 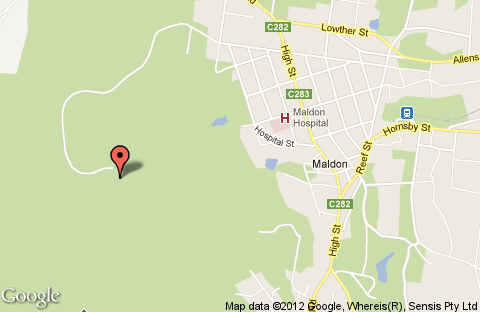 A Short History of the Tower

The tower is one of Maldon's most distinctive landmarks. Erected in 1923 by the Advance Association as an attraction to draw visitors to Maldon, the tower was made using the legs from the Comet Mine in Bendigo, brought to Maldon by train, the legs were carried up the mountain on a horse-drawn jinker. The tower was opened 26th January 1964.
Mt Tarrangower was the scene of much mining activity, with the shafts of the Mt Top Mine and Tarrangower Mine located at the top of the mount itself. Several other workings extended north and south of the peak.
If you decide to take a walk around the bush area, caution must be exercised as the area was a scene of much frenzied activity and the gold was found at relatively shallow depths. Please keep to the tracks as many of the small shafts are open and stone retaining walls and other structures are loosely constructed.